From The Satanic Wiki
Jump to navigation Jump to search

Freedom from Religion Foundation, Inc. et al v. Franklin County, Indiana was lawsuit begin in 2015 involving the plaintiffs Wisconsin-based Freedom From Religion Foundation (FFRF) and Massachusetts-based United Federation of Churches LLC (d/b/a The Satanic Temple) both represented by the ACLU of Indiana against the defendant, Franklin County, Indiana. It concerned the county having allowed a privately owned Nativity scene to occupy the courthouse square at Christmas. An initial lawsuit was dismissed due to its issues being moot before a second suit that included The Satanic Temple resulted in a settlement favoring religious plurality so long as there was local representation of the organization. It was not obvious if other

In December 2014, FFRF and two FFRF members filed suit against Franklin County alleging that a life-size nativity scene displayed on the courthouse lawn every Christmas season for approximately fifty years, violated the Establishment Clause of the First Amendment.[1] The Satanic Temple joined with FFRF to challenge County Ordinance 2015-02, regulating the use of the courthouse lawn by persons seeking to erect public displays. According to the purpose statement of Ordinance 2015-02, “[i]t is the county’s policy to provide all county citizens with equal access to the courthouse grounds.”[2][3]

In mid-February 2015, FFRF submitted a permit application to erect a display on the courthouse lawn “consist[ing] of several cut-out figures celebrating the December 15th nativity of the Bill of Rights.” FFRR explained its desire to have its display on the courthouse lawn from November 29, 2015 through January 6, 2016: “the County has violated the Establishment Clause for decades, and it wishes to present a countervailing message to the nativity scene observed by County residents and visitors for half a century.”

After the lawsuit was filed in December 2014, the Franklin County Board of Commissioners had the Nativity scene removed on Dec. 26. In January, the board established new rules for the use of the public square. In February 2015, attorneys for Franklin County filed a motion to dismiss the lawsuit, but the Freedom From Religion Foundation, represented by Indiana American Civil Liberties Union attorney Gavin Rose, opposed the dismissal. The plaintiffs were seeking monetary damages from Franklin County.

TST wanted to display a three-dimensional sculpture mounted on a wooden platform to help others understand its beliefs, the lawsuit said.

According to court documents, attorneys from the Thomas More Society questioned whether all parties were properly served notice of the second lawsuit. The court was asked in a motion filed by the plaintiffs to have a U.S. marshal serve the summons and paperwork in person to the Franklin County commissioners.

In September 2015, the federal judge dismissed the lawsuit. Federal district Judge Tanya Walton Pratt said in a ruling that because a newly passed ordinance already allows Franklin County residents to erect their own displays — religious or not — outside the courthouse. Officials had enacted the ordinance about a month after the lawsuit was filed.

"Given the fact that the policies for Courthouse displays were changed upon Franklin County's own volition (albeit under the pressure of the instant litigation), the Court finds that there is no reasonable expectation that the allegedly unconstitutional activity will recur and there is no proof presently which suggests that Franklin County has committed a constitutional violation," Walton Pratt wrote.

The ruling did not address whether a government entity should place religious displays on public property.[4]

Parties agreed to dismiss the lawsuit with the understanding that Franklin County would allow local residents and churches to erect religious and nonreligious displays outside the courthouse in Brookville.

In the settlement, Franklin County agreed to amend its ordinance concerning displays at the courthouse. The amended ordinance for the courthouse display permitting process would accept the designation of a local contact in lieu of requiring that sponsorship be wholly by citizens of Franklin County. The Satanic Temple, and other organizations, would be allowed to put up a display if it found a resident of Franklin County or any adjacent Indiana county (Dearborn, Ripley, Rush, Decatur, Fayette, or Union counties) willing to serve as that local contact. The contact would have to be a person who lived or worked in Franklin County and assumed responsibility for the display.[5][6][7] 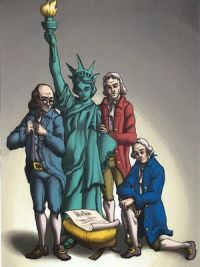 As of March 2015, the Palladium-Item had reported that resident Steve Kristoff, represented in the initial, dismissed lawsuit, had rented Lot 2, with plans to display banners celebrating the winter solstice. The Rev. A.L. Levi also wanted to rent Lot 2 to display the three wise men, but since that space was taken, he had rented Lot 3 to display the five levels of Hell. Aroma’s Breakfast Club, the group that owns the 60-year-old Nativity scene, reserved Lot 1 on the square where the Nativity scene traditionally had been displayed for more than a half-century.[8]

In November of that year, the Indy Star reported nine applications had been approved by the county, including Kristoff and a local resident on behalf of the FFRF. Local Baptist churches and the Metamora Church of God in Laurel also applied and were approved to erect their own religious displays.[9] The FFRF display was to include the Statue of Liberty, George Washington, Benjamin Franklin and Thomas Jefferson huddled around a manger with the Bill of Rights in it.

It was not clear if The Satanic Temple ever followed through on its nativity in the area.